For centuries, waves of conquerors have descended upon an ancient city set off in a far-off Asian land. The conquerors always rechristened the city after their likenesses—from the Yanjing people to the Dao and then the Cambullac. Thus, the city with a thousand names has become known to its native inhabitants as the Nameless City: “whoever conquers the city always renames it.”

Faith Erin Hicks’ first book in her new graphic novel series follows the adventures of Kaidu, a bookish Dao teenager who has left his mother’s countryside home to train as a warrior in the Nameless City. The Dao presently claim the city as their own. Kaidu’s sensei is Erzi, the last conqueror’s son (and the first Dao born in the city) and his foreign-born girlfriend Mura. Kaidu’s own father serves as councilor to the current emperor and his son, Erzi (first Dao born in the city). After one particularly rough day in which Kaidu is mercilessly teased by the other warriors-in-training, Kaidu’s father takes him on an excursion into the city, in which he sees a poor, starving orphan descended from the native inhabitants observing them from a rooftop. Craving for the meat kabob he tasted from a street vendor within the old city, Erzi’s foreign-born girlfriend Mura suggests to Kaidu go off and explore the city on his own terms. He stealthily steals away after training and runs into Rat, the poor orphan girl on the rooftop. Rat steals Kaidu’s dagger and runs rapidly away. Desperate to find the dagger which his father has gifted him, Kaidu pursues Rat throughout the city, noticing the speed and agility with which she is able to outmaneuver him. He tricks Rat after a long rooftop chase (which involves leaping over buildings in a single, running bound) and gets his dagger back, but not before striking a compromise with the wily street urchin—teach him to race in exchange for food and clothing. Rat reluctantly agrees. Hicks’ scenes of rooftop pursuit are exhilarating and joy-filled, as Kaidu follows Rat’s lead and tests the limits of his capabilities.

Kaidu’s burgeoning relationship with Rat and his own discomfort in pursuing the chosen profession of his kinsfolk is what drives the narrative. Hicks conveys that wonderful moment when a young person discovers their destiny and the fear and burgeoning wonder at newly discovered abilities that potentially put him at conflict with family and cultural expectations. Kaidu is more runner than a fighter and that’s ok. While their friendship transcends the hatred and prickly politics between conquered and conqueror, it is continually tested by a loyalty and allegiance that threatens a deeper divide between the haves (Dao) and the have nots (the native inhabitants).

Fans of Avatar: The Last Airbender, The Legend of Korra and Princess Mononoke will find lots to like here. Hicks conveys a similar sense of spirituality, awe and wonder that has made Avatar such a modern classic. The color and movement, the emotional resonance, all evoke the best moments of the Avatar, though Hicks is doing her own unique thing here with grace notes and plot twists. Hicks captures the vastness of the city with her panel design and understated pencils. She also captures the small intimacies of family and friendship that are barely noticeable, but tear-invoking just the same.  There are moments of betrayal, sacrifice and heroism that grab at your gut and keep you compulsively turning pages. The Nameless City is a considerate and wonderfully plotted graphic novel that has much to teach about tolerance and friendship. We can’t wait for the sequels. 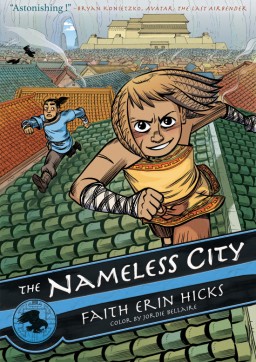